If you lose the duvet in the night, you are not alone. Many couples war over this issue. Are you the one who wakes up cold, or do you hold the duvet close to you all night?

Now, I have been accused of being the duvet hogger many times. I have been married to my husband

for 13 1/2 years. As a child I remember having hot feet and needing to stick them out from under the covers. Over the years, I have lost that warmth in my extremities, and love to snuggle up with my hot water bottle under the duvet.

I’ve been in the spare room for a few nights in a row. I’ve had seasonal lurgy, and attempting to sleep without companions seemed to be the best choice. Note my surprise when I walked back into our bedroom this morning to find NONE of the duvet on my side. Half of it was on the floor. I rest my case.

In our house, we struggle to agree on when the right time is to change the tog level of the duvet. We have one of these two-layer things, so we have different options for spring/autumn, summer and winter. I’m always tempted to keep the thicker layer in for longer than my husband thinks is necessary. We then niggle over who goes to the top of the airing cupboard to fetch the other layer in October.

I’ve been reading up on this. Research suggests that if you had a cuddly toy in bed as a child, you are more likely to hold on the duvet. You may also toss and turn, and sleep-talk to your childhood companion. However, by holding on to the duvet all night, you are also likely to deprive your partner of a good night’s sleep.

Holding on to the duvet

As this issue causes some problems in our house, I’ve been looking for a solution. One couple I know have separate single duvets. This is not a new idea, of course – it is common practice in many countries on the continent. I was chatting to another friend who had tried it. It sounded like a great idea in theory, but their experience showed it was a nightmare.

Over the course of the night, one of the duvets would go missing. She and her husband would wake up each morning, covered by only one duvet that was sideways on. While this might not be a problem for someone of my stature, I am not sure it would work for those who are more blessed in the height 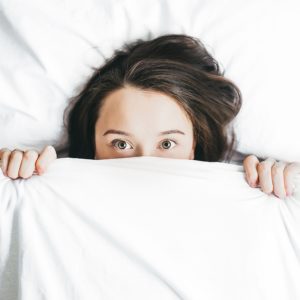 We kind-of fell into a solution in the end. It was so cold one night, but rather than fight to put in two layers of the duvet into one cover, I decided to put the spare single duvet on top of the king we share. It looked a bit naff, and I was convinced it would slip off in the night. In spite of this, we both had the best night’s sleep we had had in ages. Finally – a workable solution!

How have you resolved this issue?  Did you or your partner buy a cover clamp? Do you row about it each morning? Or have you talked it through and found another way to ensure you both get a good night’s sleep?  Let me know!